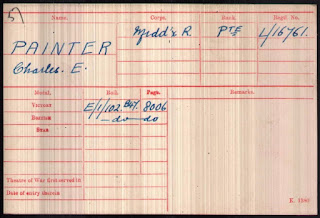 I met Charles Painter in January 1982. Then aged 81, he was an in-patient at The Royal Hospital, Chelsea. Born on the 13th July 1900 he had enlisted, under age in December 1916, signing up not just for the duration of the war but as a regukar, career soldier for a period of seven years with the colours and five years on the reserve. Although he lied about his age, he was soon found out and served as a boy until July 1918. By the time he was ready to sail for France, the Armistice had been signed and he and others set sail for Russia where they would spend the next eighteen months. His British War and Victory Medal roll entry notes that he was attached to the North Russia Expeditionary Force.

Charles was still serving in 1920 and was issued with a new regimental number: 6189311. His service reocrd presumably still survives with the MoD. 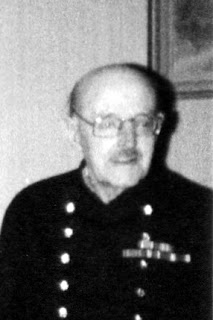 My transcription of the notes from that meeting in Chelsea are very brief and read as follows:


CEP:
Well we were a soldiering family.  My father was an RSM and my brother, he’d enlisted and I didn’t like to be the odd man left out so I run away.  I was apprenticed at the time and I run away from that and I enlisted, told them I was 17 and I was accepted. And my father heard about it and he said, “Oi, you stop there now.  You’ll have to go on boy service.” And I had to go on boy service until early in 1918.  And from then on I was soldiering and I had a life of it.

I was already to go to and the Armistice was signed but that didn’t stop us from going, we went to north instead and spent about eighteen months up in north .  The going was easy as far as fighting was concerned, there were only skirmishes and we lost very few casualties – we inflicted more.  It was all marching, going through the forest, down a railway line, down towards Petrograd as it was, now .  And we used to be living on hard tack or bully.  We didn’t have any fresh bread or fresh meat for about six months and one of our fellas found a bakery and he got some flour from the quartermaster and he decided to make some bread. We used them for cannon balls.

Well there as a big dump of article of war and rations etc that the British Government had given to the Russian Army, worth about a million pounds, this was at .  And they wanted to evacuate this but eventually they couldn’t, they had to evacuate themselves. Once we got moving backwards we had to slip out fairly quickly and left all that stuff there but not before we’d had a dig in. I know I brought home half a kit bag full of tobacco for my father.

We were there until 1919 and we came home from there.