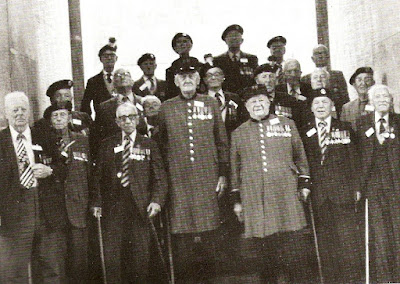 I interviewed Charles Quinnell at The Royal Hospital, Chelsea on the 25th January 1982. He was oft quoted and appeared in a number of TV documentaries. The photograph above shows Charles and Alf Worrell in their Chelsea Pensioner uniforms along with other WW1 veterans at the Menin Gate, Ypres. This photograph was published in Rose Coombs' Before Endeavours Fade.

This is what Charles Quinnell told me.

"Sixty men were taken out of our battalion in December 1915 and we acted as labourers to professional miners who were sapping and mining under the German lines to counter the German mining. All you saw as you walked along the trench was a square opening which was four feet high and two feet wide: a doorway. That was the top of a staircase. Each stair was one foot deep and that went down thirty feet into the ground. When you were down at the bottom there it opened out into a room ten feet square which was propped up with tree trunks, and in the centre of that room was the shaft. That went down fifteen or sixteen feet and then they used to start tunneling. As this professional miner tunneled so his one and only tool was an ordinary bayonet, an ordinary soldier’s bayonet. And he used to stick that in and he’d go like that, whip it round and out would come like a big cheese. Those cheeses were loaded into sandbags and each sandbag took three or four of these cheeses. Then the man next to the miner, an infantryman – he was an RE, Royal Engineer, the miner was – then the chain of men along the tunnel and then at the bottom of the shaft a windlass and they were hauled up into the room and then up the staircase into the trench and you used to have a man up the top of the trench and he used to sling ‘em over the top.

"Now the job was alright but it was very very wet. In the tunnel, right at the bottom of the mine it was drip, drip, drip all the time and being only four foot high you was crouched down all the time and so in consequence the back of your back got sopping wet.

"Well that was the job and the theory of it was eight hours on and sixteen hours off. Well in that sixteen hours we were billeted in the town of Bethune in French barracks and there was no comfort there at all, just plain barracks and not a stick of furniture: no tables, no chairs. The traveling back to Bethune and also traveling back to the mine was all taken out of your sixteen hours. And sometimes, if you were held up with the shellfire that would take three or four hours out of your sixteen.

"Well, on one occasion when we arrived at the mine, the three mines – this is at Givenchy – were known as Duckbill One, Duckbill Two and Duckbill Three. When we arrived at this Ducksbill were told that there was no mining going on because they expected the Germans to blow. See the theory of it was, the Germans mined and our people mined and we used to try and catch the Germans and blow their shaft in, and they used to do the same to us you see. Well when we got there on this particular day, we got the news that the Germans were going to blow – or they were expected to blow – and there was only a man, one of these miners, right at the end of the shaft, right at the end of the tunnel, and he had a stethoscope – like a doctor’s stethoscope – and he held it up against the wall of the tunnel. And you could hear if the Germans were working, well you could hear them talking.

"At any rate, on this particular day when I got there I went down into the mine and right up the end of the tunnel there was this RE man on a sandbag and he was sitting there and he’d got this stethoscope right against the wall. Well you spoke in whispers in case the Germans were listening. And I said, [whispering] “Are they going to blow?” And he didn’t know, he said, [whispering] “you get out of it.”

"So I was coming back away from him and I’m damned if the Germans didn’t blow. Now you’ve heard of brave men who have never been afraid. Boy, I was absolutely scared stiff. This tunnel we were in, the framework went up like that and then like that and you were thrown from one side to the other. But the timber held and the Germans didn’t blow our tunnel in. Boy, I was scared stiff. He spoke in a normal voice now, he said, “it’s alright, they’ve blown, it’s quite safe now.” At any rate, we carried on with the work and that was that.

"We went over the top on the Somme on the 7th July and we got absolutely cut to pieces. We had two machine guns on us and I was a platoon sergeant. I went in with 43 men, I came out with one private, one lance corporal and myself. It was a heartbreaking job because we didn’t get what we went after at the village of Ovillers. Incidentally, we were the third lot to have a go at it. The 3rd Division had had a go at it, another lot had had a go at it but it was a wonderful position and the trouble was our artillery gave four hours bombardment before we went over but there were two machine guns placed about six or seven hundred yards behind the German lines and they were the boys who did the killing.

"They smashed up the German front line – there was little or no infantry rifle shot against us but these two machine guns they had the range right to an inch and they just mowed our boys down when they went over.

"Anyway, we came out, we got made up with a draft and we went over the top again on the 4th August, the second anniversary of the war, on a night attack. Now this will emphasize the luck of the game. These boys had only had three months’ training and when I heard that we were going over my first reaction was, “Oh Christ, not with this lot.” But give credit where it’s due, these boys went over like veterans and we took two lines. We only lost eleven men and we took lines. We had 128 prisoners. That just shows the luck of the game; we caught the Jerries on the hop. We went over behind curtain fire and that was one of the first times that the curtain fire had been used. Now curtain fire is shrapnel fire: one bursts here, another bursts there, another bursts there you see. And then they travel; you’re attacking the trench over there, you start from here and as we advanced so they altered their guns. Creeping barrage. It was a wonderful experience and when we got to the German lines they were all kneeling on the bottom of the trench with their hands up. We took more prisoners than what our strength was. It was just the luck of the game. You see on the 7th July we went over and we got cut to pieces and took nothing, only three men left out of forty three and that was pretty general right throughout the battalion. And yet on the 4th August we went over with a lot of rookies and we took all those prisoners. It was just the luck."