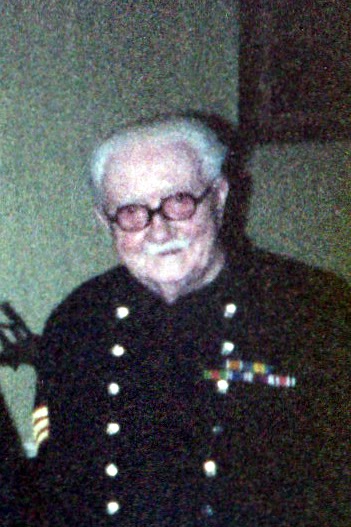 John Cameron McLellan was born at Dumfries on the 20th June 1899 and I interviewed him at The Royal Hospital, Chelsea in January 1982. Enlisting in the 2/5th KOSB in November 1914, it was not until 1918 that he went to France.
"When my battalion got to its war strength, I was transferred from Dumfries where the battalion was formed, to a holding battalion in Catterick Camp, .  My number with the KOSB was 2538 but when I got to this holding battalion I was given the number 240801 and that was in the 12th Provisional Battalion, a training battalion.  I stayed there until March 1918 when I was old enough to go to .


"When I got to I was fortunate.  I was able to join the 6th Battalion of the same regiment, part of the 9th Division.  I saw action In , mostly in the sector but I’m going to tell you how we heard about the finish of the war.


"We had been out on rest on the outskirts of – big city there. And we were lying – at least I was with several others – on the top floor of an old building. All the fan lights had been painted black, the village seemed to be almost deserted, there were very few people in the village and there was no light anywhere.


"We were getting to bed or lying down on the floor on a palliasse – a sack full of straw – somewhere between nine and ten roughly and I heard a set of pipes playing. Well at that time of night it was a most unusual occurrence so I cocked my ear and listened and picked up the regimental march of the KOSB: the blue bonnets are over the border.  This was so unusual I had to find out why so I said right, put the bloody lights out.  The lights were candles stuck in bottles here and there so they blew the lights out and I lifted one of the skylights and where before the village had been in total darkness it was now just a blaze of light.  All the windows were lit up, doors were open, the street was full of civilians and soldiers shouting and singing.  And out of the noise I picked up the words “Guerre finis” which means “war finished” in French.  And I turned to the lads and I said, “Hey, they say the bloody war’s finished.” So we quickly pulled on some trousers and we could still hear these pipes going up and down and when I got downstairs it was the pipe major of the 6th Battalion who was walking up and down and he’d only got his shirt on, his Glengarry and a pair of boots, and he was playing the regimental march.


"Well eventually he was going down towards the end of the street and everybody sort of got behind him because at the bottom of the street was a big house, a big mansion, and that was regimental headquarters and the officers’ mess. So we got into the forecourt there, dragged him in, still playing, and eventually the commanding officer and the adjutant came out on a balcony on the first floor. He held his hands up [and] eventually he got peace and he more or less said, “Well lads, I’ve got some news for you. We have been informed that the Germans have agreed to sign an armistice at eleven o’clock tomorrow morning.  That means to say the war is finished.”


"Well one mighty cheer went up and that was it.  I think everybody got pie-eyed.  Where the wine came from I don’t know but it seemed to appear from nowhere.  Well that was it.  The next day we should have been going up the line [but] we got the orders to stand fast and eventually we were re-kitted with new clothing, new equipment and we echeloned up with the Americans right up into Germany with the Army of Occupation.


"I stayed with the KOSB until 1919 when, because I could speak German, I was transferred to the Military Mounted Police [number P19145]  for duty on the border in collaboration with the German Mounted Police.  I was with them a year and a half and then I was transferred to the Special Investigation Branch and I became a detective for the next seven years.  I then went back to the uniformed police and I finished up in 1939 as Regimental Sergeant Major in ."
John McLellan died in November 1989 aged 90.
Recalled by Paul Nixon at 20:54