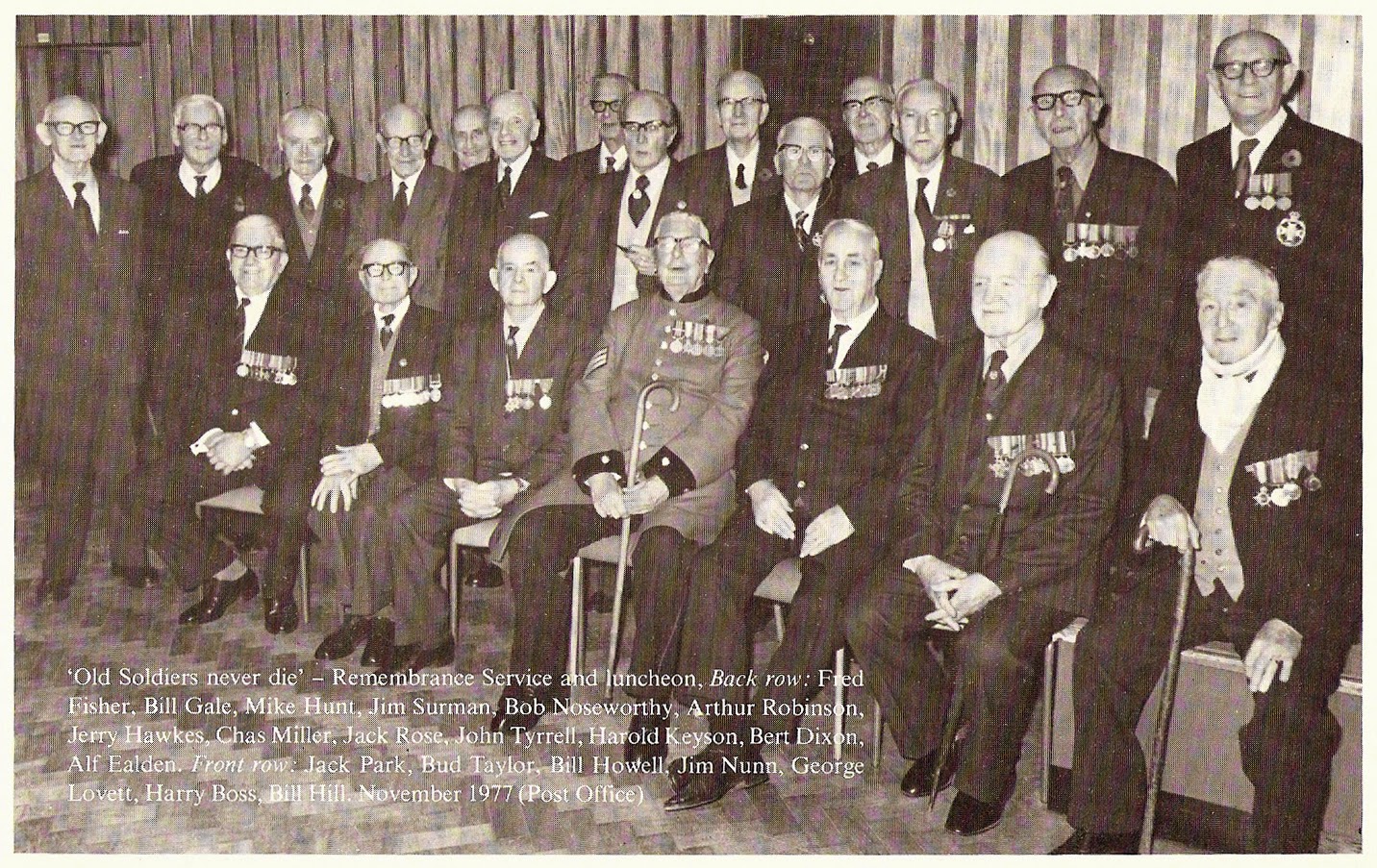 Jerry Hawkes (seventh from left in the photo above) deserves more space than I am able to dedicate to him on this particular post. He was one of several Post Office Rifles veterans that I interviewed in the mid 1980s and he had a good recall for names - and nicknames.  This post will try and shed further light on some of the characters he mentioned in my discussion with him.

Jerry Hawkes was actually Albert William Francis Hawkes and he was born in Goswell Road in the City of London on 25th October 1896. He told me, "They know me as Jerry. I don't know where I got that name from, no idea. I became a telegraph boy when I was just a lad. I was in the Post Office orphan homes because my father died early and I was there for a long, long time." His original regimental number with the 8th (City of London) Battalion, London Regiment (Post Office Rifles) was 1585 which indicates that he joined the regiment in early 1913.

"My best pal of all was Ted Harsant and poor old Ted he got killed. He lived in Goswell Road near me."  This is 1920 Sergeant Frederick William Harsant who was killed in action on 21st May 1916. The Commonwealth War Graves website tells us that he was the son of William David and Emily Virtue Harsant, of 2, Pickard St., City Rd., London. Ted has no known grave and is commemorated on the Arras Memorial.

"We had an officer called Maxwell and he always used to say, I want the deepest dug-out you've got. We used to call him dug-out Maxwell. He finished up as brigadier. Brigadier! Maxwell was windy but his boy wasn't a bad bloke." This is Captain A Maxwell CMG, DSO; later Brigadier-General 174th Infantry Brigade.

"They were nearly all post office men in our mob and we had a fella, Sergeant-Major Chivers, and he always got nick-named "Chum" because every time he spoke  he used to say, "Now don't forget this, chum". Chum this and chum that and so we nicknamed him Chum Chivers." 1443 CSM Simeon George Chivers MC died of wounds on 19th September 1916 aged 42. He was the husband of Charlotte Florence Elizabeth Chivers of 34 Douglas Road, Surbiton, Surrey. He is buried in St Sever Cemetery, Rouen. As well as the Military Cross, CSM Chivers was also Mentioned in Despatches.

"I was in number 4 platoon, Captain Milne's company which was number 2, the same as Bill Howell. I remember being with him in the trenches. We always called him Sammy; I don't know why."
There is a medal index card for a Major D D Milne, 8th London Regt, later Highland Light Infantry. Bill Howell is the same 2518 Bill Howell I interviewed at around the time I met Jerry Hawkes. I have posted about him HERE.

"We had two relations in our mob, Aberdeen their name was. One was a boy messenger same as me and he put his age up same as I did. Two brothers: Aberdeen and Aber; we always knew the other one as Aber." Probably 520, later 370045 Alexander A Aberdeen and 1559 Frederick Arthur Aberdeen. Frederick, the younger of the two boys, was killed in action on the 15th September 1916 and is buried at Caterpillar Valley Cemetery in Longueval. The Commonwealth War Graves Commission notes that he was the son of Mr and Mrs A W Aberdeen, of 389 Northampton Buildings, Clerkenwell, London. His elder brother joined the Post Office Rifles in 1908 and may well have seen prior service with the 24th Middlesex Rifle Volunteer Corps. Jerry remembered that "Abber finished up as a sergeant major. He was a wonderful man."

"After the war they transferred me to Stoke Newington because we lived near there and one of the blokes in the office there finished up in my platoon: Harry Diggins. He was a proper clown. He didn't care two hoots about anybody up the line. He just didn't care." This is 1806 Pte Henry Diggins, later 370316. Although his number indicates that he joined the 8th Londons in February 1914, Harry did not go overseas until after 1915. His service record survives in WO 364.

I only met Jerry Hawkes once, at his home in Iwade, Kent in 1986. He died in late 1988 or early 1989, his death registered in January of that year. The photo is taken from Charles Messenger's Terriers in the Trenches.