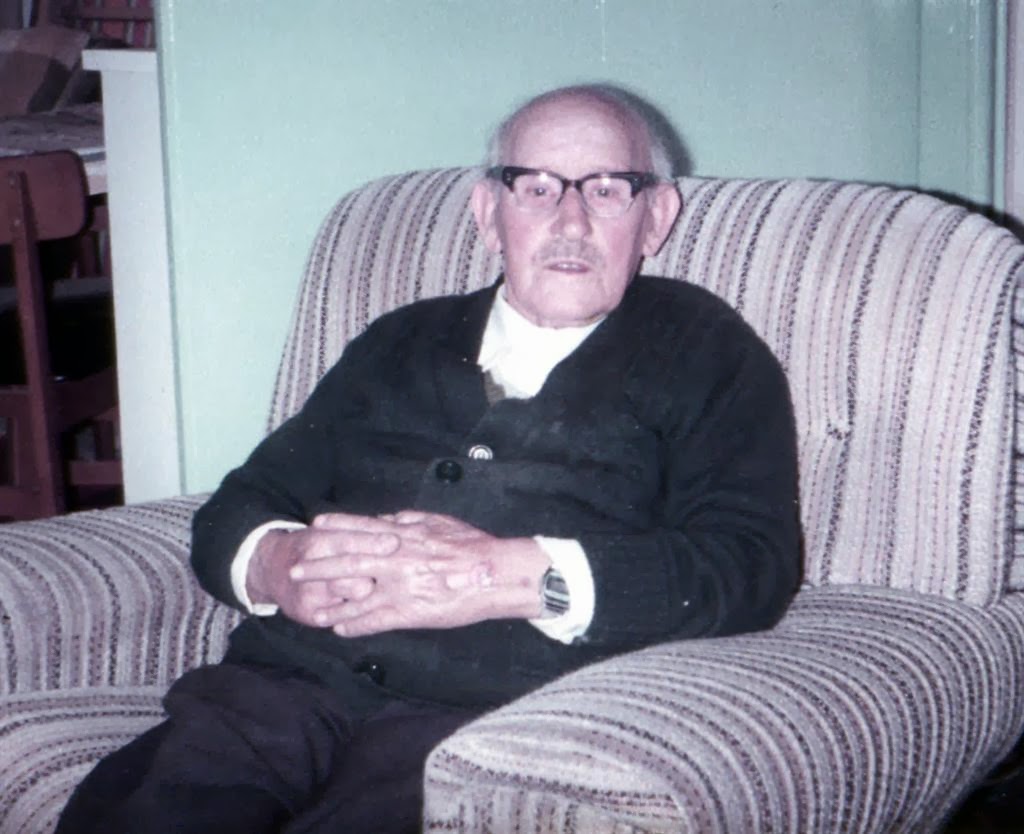 I interviewed Frank Hutchinson at his home in Loughborough in 1984 whilst I was studying at the university there.  Frank was born at Loughborough on 22nd October 1898 and was a wood machinist at Moss and Sons. He joined the 5th Leicestershire Regiment as a seventeen-year-old in October 1915, subsequently transferring to the Scots Guards and latterly the Machine Gun Corps.
Here, he describes the action in September 1918 which resulted in the award of his Military Medal.
".  He says don’t go over the trench, go along and you come out on the wide open spaces.  Then head for the dry canal.ell we filed out and Jerry let us have every damned thing.  He knowed we were coming.  Everything he could pile at us he piled at us.  The kids were squealing and chaps were going down and it was murder.  I yelled out, “keep spread out, keep spread out.”  There was this young chap from and he kept running to me.  How he got into the army I don’t know because his leg was straight down to the knee and then it bent out.  He’d only just come out and this was his first do and I felt sorry for him.

"A shell burst right on us and ‘bout deafened us and the bits were flying all round.  I thought to myself, “I told I was going to get it and I’m getting it.” Anyway, I looked and it’s not a nice thing to say but I was smothered with the bits from that lad, it had blowed him to bits.

"Anyway I started to run like the lads and we headed towards one of our tanks which had been knocked out.  We kept expecting to come across the German lines but all we came to was a shallow overgrown trench which had once been Jerry’s horse lines.  There was a post where they were tied and they’d be standing about two feet below the ground level so that their legs were protected.  That’s where I headed and it were flat so we had to get to work quick with the entrenching tools so we could dig a space to open the gun out.  Well we got it up so that we were peeping over the top and bullets were flying round us.

"There was a hut over to the left and that’s where Jerry’s guns were.  We couldn’t see his trench because all the ground was the same colour.  I started firing away at this cottage but it didn’t seem to make any difference.  Then come and said he’d got a better place for us and to send the lads back.  I was the last one to go and as I jumps on the top there’s a bang.  It were a real bang and it were between my legs.  I stood there looking and then all of a sudden I felt faint and down I went.  A piece of me leg had blew out and even took me trousers with it.  One of Jerry’s dum-dum bullets had burst in me leg and blown all the insides out.

"The next thing I knew I was coming to and Franklin and Sergeant Simmonds were bandaging my leg up.  Thy put me up against this bank and they dressed it.  Anyway, they left me, and the other chap who was with me on the gun helped me into a trench.  There was only me and him left and a young kid who’d come up with us.  He was in the trench and was shaking like a leaf he was terrified.

"I set the gun up and I lay there as if I’d been hit.  Old Jerry were sending shells over and they were bursting all around us.  I looked out and I could see them coming over and I thought, “now’s the time Frankie m’lad, it’s your life against them.” I just pressed down my thumb belt and come round and thought, “all right boys, you’re taking the lot.”  I went right through them and came right back down. I wondered what the hell I was doing.  I don’t know what became of myself, I felt funny.

"Some of the lads were squealing and some were running back and I set to on them with the gun again.  I finished three parts of two hundred and forty rounds.  I finished them all among the lads.  There must have been seventy or eighty of them. I said to Donnelly, “that’s finished them.”  There was no reply and I turned him over and he was covered in blood.  A bullet had hit him in the head and killed him.

"A Jock came round the corner and asked for some water.  He’s had the top of his right knee taken off by a bullet whereas my wound was to the left leg.  Then Major Whitehouse came round and congratulated me on what I’d done.  All he could say was, “Top Hole.”"
﻿ 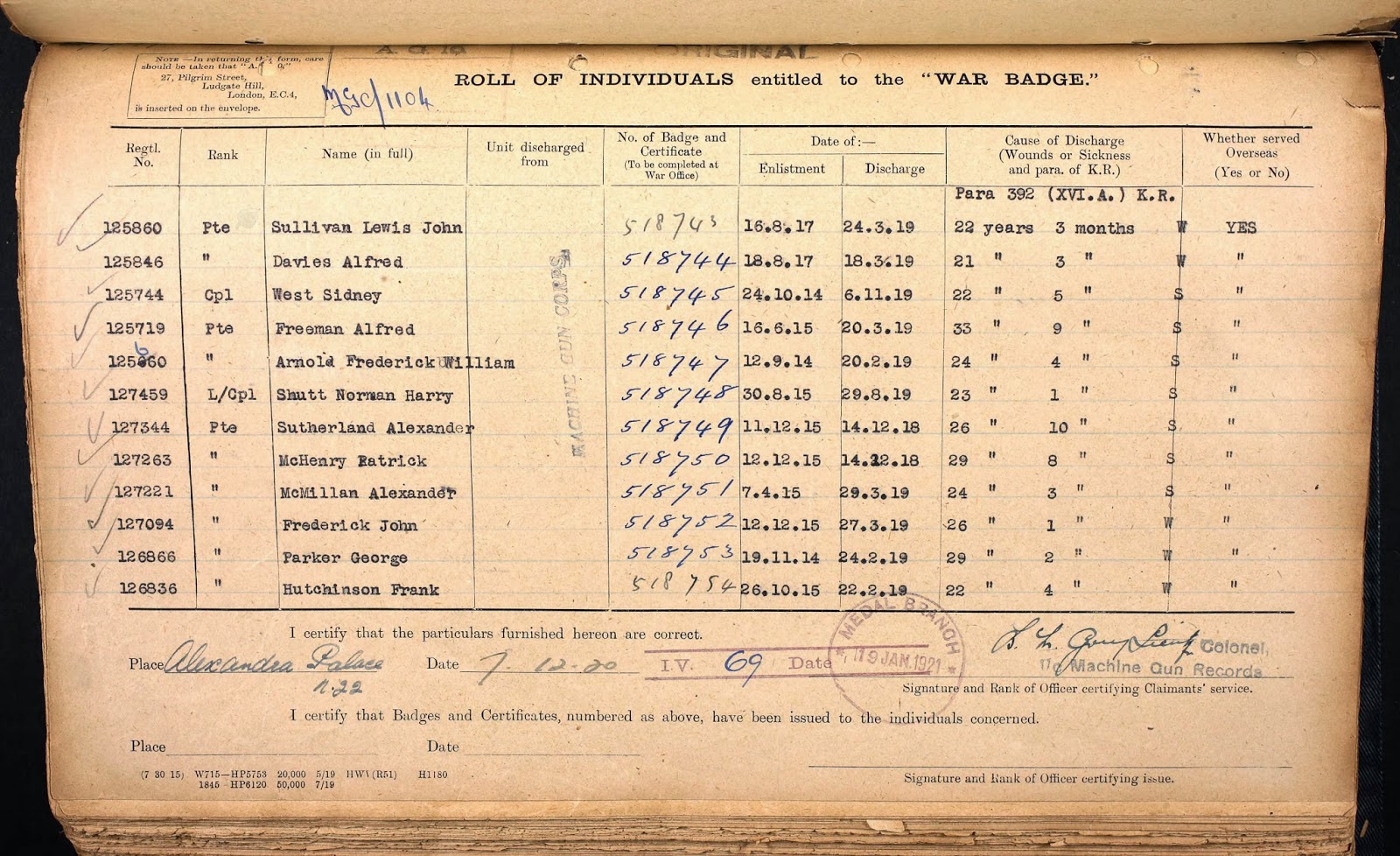 Frank's service record does not survive, but his entry on the Silver War Badge roll (above), confirms his date of enlistment.  Frank had told me that he'd enlisted in November 1915, so he wasn't far out.
I only met Frank Hutchinson the once but he was extremely proud of his gallantry award and was a great orator. He died in April 1987 aged 88.
The SWB image is Crown Copyright and is reproduced courtesy of The National Archives.﻿ 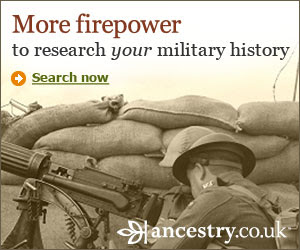