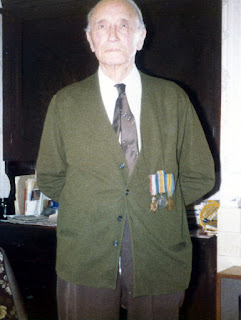 I snapped the photo above when I met Clifford Goldsworthy Rust at his home in Chelmsford on the 11th September 1981.  As I now remark, twenty years later, to the day, two planes would smash into the twin towers in New York.  Back in 1981 though, I was keen to meet as many WW1 men as I could, and Mr Rust was one of four veterans who lived in the Keene Memorial Homes in Broomfield Road. He was immensely proud of the fact that he was one of Kitchener's first hundred thousand and, asked if I could take his photo, hurriedly found his trio and pinned them to his cardigan, standing to attention for me.  I'm afraid I chopped the top of his head off.

Clifford was born on the 16th October 1895.  He told me his place of birth was Hylands Park, Writtle and indeed, the 1901 census shows him as the five year old son of Uzziel Rust, estate bailiff of Southwoods Farm, Hylands, although his place of birth is recorded on the census as Margaretting, Essex.  Hylands was and still is a large estate, its boundaries touching Writtle and Widford and edging Margaretting and Highwoods.

The 1911 census shows Clifford living with his brother Uzziel, his sister Alice and her husband Joseph Corin Cohen at 183 Moulsham Street, Chelmsford.  Clifford is noted as a 15-year-old schoolboy, his place of birth recorded as "Hylands Widford Essex" although Hylands is scored through. 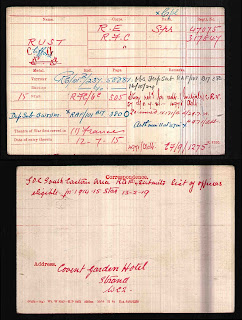 My notes from our meeting are very brief. He told me that he took part in the Second Battle of Ypres in the spring of 1915 and also went "over the top" on 1st July 1916.  Asked how he felt about that he stated, "We didn't know anything about it; you just didn't care."

Clifford's medal index card (above) fills in some gaps and also shows that he arrived in France too late for Second Ypres.  Of more interest though is a copy of his record of service which﻿ he gave me when I met him and which I reproduce below.  This shows his progression from a sapper with the Royal Engineers, appointment as lance-corporal,  promotion to corporal and then transfer to the Royal Flying Corps.  He was graded as flight cadet exactly one week before the signing of the Armistice and was commissioned in February 1919.  His service record presumably still survives at the National Archives or at the RAF museum in Hendon. 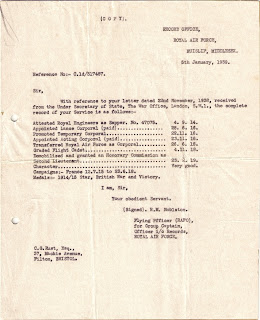 I﻿ only met Clifford Rust on that one occasion and see from a handwritten note that he died on the 18th June 1987 aged 91.
Recalled by Paul Nixon at 08:08

Fascinating to come across this as Clifford is a distant relation of mine. I have some great pictures of him in uniform whilst serving from his surviving niece.

On Sunday 14th September we are having a special day at Hylands House - Essex at War. I have been reserching the men of the Hylands Estate who served. On Thursday a young man came into the Friends of Hylands Bookshop, where I am an administrator and was looking at our WW1 display and he told me about Clifford. I am afraid I had missed him out, so I am now collecting information for a folder for him. It would be wonderful to have photos.