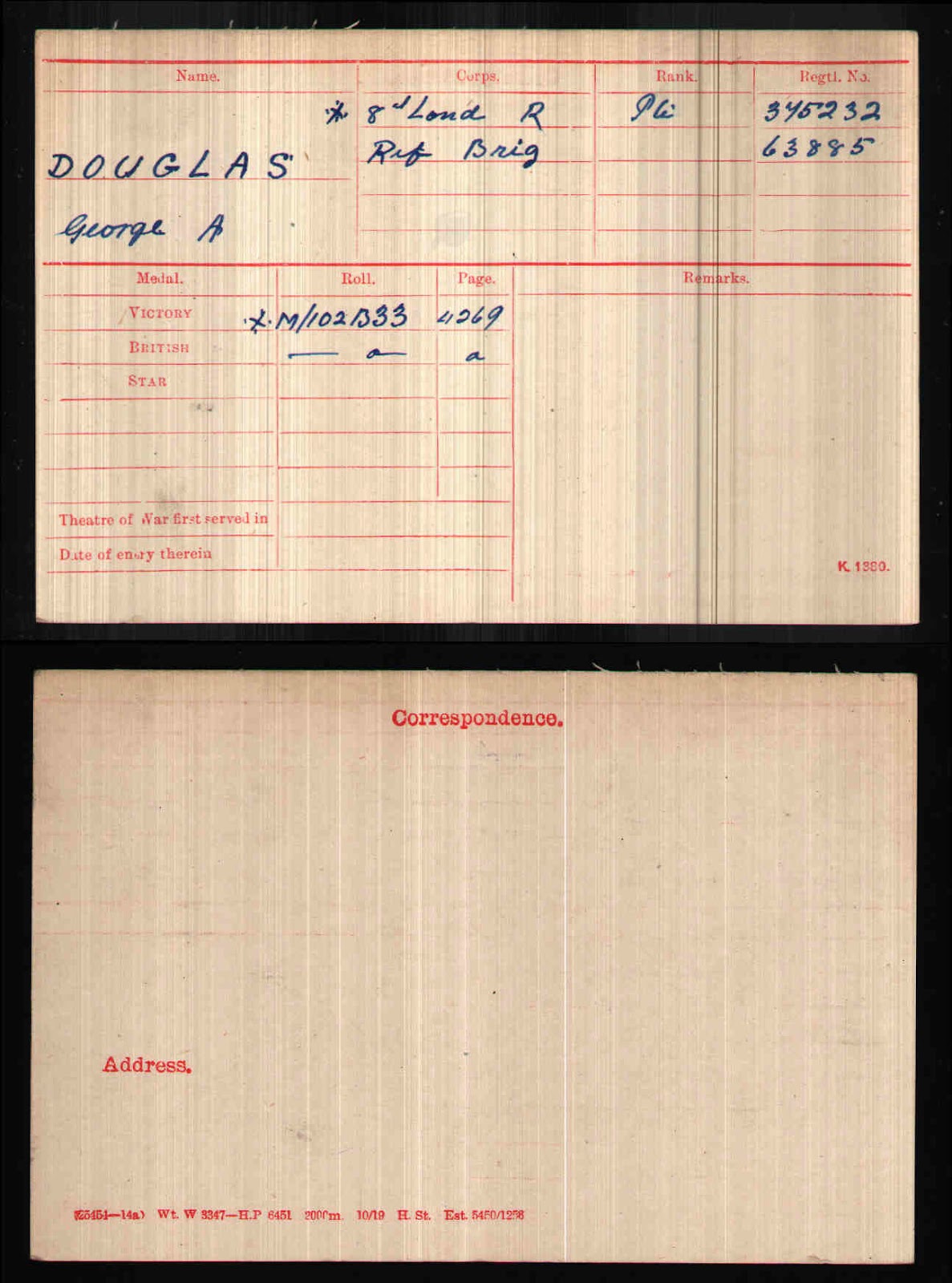 I never met George Armet Douglas but I did contact him in November 1986 when I was trying - fruitlessly and unsurprisingly, as it turned out - to find men who may have served with my Great Uncle John (Jack) Frederick Nixon.  This was Mr Armet's response to my letter of enquiry.

Your letter about your great uncle has certainly come when our memories become numerous and very vivid. Nevertheless I am sorry that I cannot say that I made contact with him before he was unfortunately killed in action. As we were under 19 years of age we were barred from active service, but once the casualties multiplied during the March 1918 German advance and then the Allies went over the top in August 1918, the A4s or under 19s were drafted out to France.

I survived the German offensive of March 1918 and then we had a spell of trench warfare in front of Albert-sur-Somme. We went over the top on the 8th August and again on the evening of 9th August, suffering heavy casualties. That return to Round Wood to be made up to strength again would most likely be your uncle's debut.

Within the trenches we ate bread, bully-beef, pork and beans, bully stew and machonochies (a tinned stew) that was heated up on our own personal improvised stove: an oily candle rag inside a ventilated bully tin (bully meaning corned beef). But as a special treat our cooks made bully rissoles and they were kept HOT in a hay-box by the quartermaster sergeant who came up with the rations in the middle of the night.

We advanced solidly after that, obtaining food when we were lucky. There was no trench life after September and it is most likely, since we moved north after breaking the Hindenburg Line to the area of Lens and Lille, that your relative was killed during the fighting in the suburbs of Lens. His name does not appear in the roll of honour published in the Battalion's history. He was so unlucky not to survive until the 11th November.

Strange to say I came home in a hospital ship in March 1919 with the flu and after sick leave was transferred to the Rifle Brigade.

Yours sincerely, George A Douglas

Jack Nixon was attached to the Post Office Rifles from the Rifle Brigade and he was killed on 3rd October 1918. He has no known grave and is commemorated on the Vis-en-Artois memorial.

George Douglas's medal index card, courtesy of Ancestry, is posted above. He also has a badly damaged service record available on both Ancestry and findmypast but easier to find on the latter. It shows that his original number with the 8th Londons was 63885 and that he attested at Edinburgh on the 10th January 1918 aged 17 years and 318 days. At the time he joined up he was working as an assistant postman and living at 55 Ashley Terrace, Edinburgh.

George's attestation was approved on the 20th March 1918 (he was now 18 years old) and he was posted to G Company of the 2/8th London Regiment and then embarked for France shortly thereafter. The date of embarkation is faded but he was certainly with B Company of the 1/8th Battalion by 7th April 1918 and thus survived the German offensive the previous month because he was too young and still in the UK.

George was admitted to a casualty clearing station with influenza in September 1918 and was still sick when the armistice was declared. Posted back to base depot on the 15th November and then back to the Post Office Rifles four days later, he served with his regiment until 13th February 1919 when he was transferred to the 2/17th London Regiment. He was admitted to hospital in Boulogne five days later with a recurrent bout of influenza (in all probability he had probably not recovered from his initial bout) and by 1st March 1919 he was on a hospital ship back to the UK. On 27th June 1919 he was transferred again, this time - as he remembers - to the 5th Rifle Brigade. He was finally discharged from the army on 22nd October 1919.