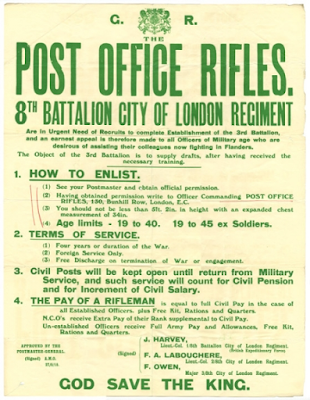 I never met Harold Keyser but I did correspond with him in 1986 when I was seeking information about my great-uncle, Jack Nixon. Jack had been attached to the Post Office Rifles when he was killed in action in October 1918 and, sixty-eight years later, I contacted all surviving members of the Post Office Rifles Old Comrades Association to see if there was anyone who remembered him.  Not surprisingly, given the passage of time, no-one did.

Writing to me in November 1986 from his home in Alton, Hampshire, Mr Keyser wrote, "I have no recollection of your relation in the Post Office Rifles. I had suffered an operation in a long period of convalescence prior to the dates you give and subsequently found myself transferred to the 17th London Regiment, much to my disgust but perhaps to my advantage." 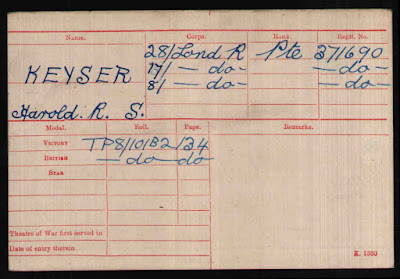 Harold Richard Stratton Keyser was born in London on the 5th October 1898, his birth registered in Camberwell in the fourth quarter of that year. He was baptised at St Philip's, Camberwell on the 11th December 1898 and appears on the 1901 census return as a two-year-old living with his parents, Richard (a boot-maker) and Harriet, at their home at 5 Astley Street, Camberwell. Ten years later, the family had grown and moved. Harold is recorded on the 1911 census as a 12-year-old schoolboy and elder brother to Gladys (six) and Sidney (two). The family was now living at 17 Upper Grange Road, Bermondsey.
Harold's medal index card, above, indicates that he joined the 8th London Regiment in January 1918 while the medal roll entry indicates that he served in France between the 2nd and 14th February 1918 with the 8th London Regiment, and then from 15th February until the end of the war with the 17th London Regiment. His medal index card suggests that he was posted back to the 8th London Regiment prior to discharge.
Harold Keyser died in Alton on the 4th July 1989 aged 90.
For assistance with your own military search, please contact me.﻿
Recalled by Paul Nixon at 07:06