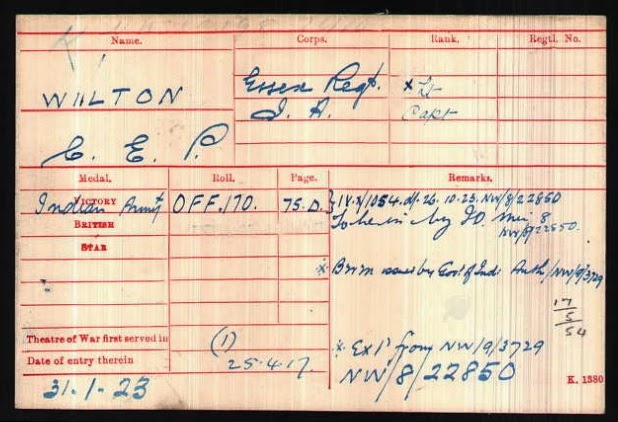 I met and interviewed Christopher Wilton in Great Dunmow, Essex in April 1984. He was born on the Isle of Wight on the 12th December 1897 and enlisted, aged 18, in May 1916. This is what he told me. My comments in square brackets.
﻿


"I joined the Gloucesters because my parents, on the male side, came from Gloucester and we can trace the family back to 1310.


"My first experience as a rookie in the 3rd Gloucesters was having to peel a whole bag of potatoes and then the next day to cut up a whole bag of onions and to be yelled at by the local sergeant in charge of recruits. After that I was sent with a platoon that had about two weeks training, to Seaford where we were encamped. There I had my first experience of life in a hut with a sergeant who was very fond of showing how great he was. And it’s very interesting at this point, because many may not believe this, that I used to hear some of the older men say, “You wait till you get out to France my laddie, you’ll have one in your back.” And I understand that this quite often did happen.


"At college I had been in the Officers’ Training Corps so at least I did know something about squad drill and how to shoulder arms etc. Consequently there were a number of privates who had similar experience and we and they were selected for special training in the evening. Eventually I was sent to Keble College, Oxford to train as an officer cadet and we lived there just like the university students, of which there were a number still in college. I’ve no idea why I was chosen for Keble College; presumably because I could manipulate my rifle but maybe – and let’s be quite frank about this – maybe because my father who had been a major in the Isle of Wight Rifles, pulled a few strings. When the war broke out he was transferred to the Essex Regiment as a regular officer.


"Anyway, I passed out. I think there must have been a whole battalion there. There were a thousand of us. I was sent to Colchester where I joined the 3rd Essex, and then went on to Felixstowe. I know my first experience was having to go to the sergeants’ mess to taste the beer. I knew damn well I was looked at by the sergeants in a queer way as much as to say, “what the hell does he know about beer?” and it was quite true, I’d never had beer in my life before.


"Eventually I was posted with a draft to France. Mind you, this was after a total of nine months’ training in the army. We went to Boulogne and from there my first experience of French railway trucks was “Chevaux 8, Hommes 40”. We were sent up the line to a place called Mazingarbe and went straight into the trenches as far as I can remember. If you want to know where Mazingarbe is it’s near La Bassee and Bethune which is in Flanders, the west of the line. I remember walking from Mazingarbe to Bethune and literally not meeting a soul. I was allowed a day off to go and have a bath and I went to Bethune where there was a place which was an officers’ rest house and you could have a hot bath. I remember sort of living in that hot bath for two hours.


"Now I want to get away from the idea that life was awful. It wasn’t. As a youngster of eighteen, only recently out of school and some six months’ training as an apprentice in the Coventry Ordnance Works, I felt thrilled. This was a completely new life and I’ve often wondered what would have happened to me if there’d been no war and I’d just carried on with my apprenticeship. I don’t think I’d have made a very good engineer. Yes, down in the trenches life was not all that pleasant. Nevertheless, there was a certain air of expectancy.


"What I hated most was claustrophobia when living down in dug-outs. I was always scared that a bomb would drop in front of the dug-out and bury me alive. Now this nearly happened once in the trenches. I was a second lieutenant and was walking along with another officer and there was a blast. He had his head blown off and I was partially buried in a mound of dust and earth. But I recovered out of that.


"Of course one was scared, but not to the extent you might imagine. The one thing I was really scared of was the midnight patrol in between the lines in No-Man’s land. Everything’s dead quiet and you suddenly find this verey light which comes right over you and you’re all exposed unless you’re down in a shell-hole.  Those were my worst moments: going out on patrol at night time between our front line and the German front line and just getting into a shell-hole, trying to listen and see if there was anyone about. That was terrible. Living day in and day out, sometimes for about ten days before one took one’s boots off, and as a consequence of that, and later on wearing puttees, I have had osteo arthritis. It was all mud, thick mud.


"After I don’t know how many months I was eventually invalided out from the front line. It was called PUO: Pyrexia of Unknown Origin. What I was I still don’t know today, but I had to go down to Etaples where the hospital was situated and then I was returned to England to an officers’ hospital in Wimbledon. All of them had this PUO which was a temperature which would not come down, and aches and pains all over the body. Anyway, I was sent on a month’s holiday and then I returned to the Essex Regiment at Felixstowe and was sent out with a whole platoon to Palestine.


"Whilst I was in the trenches in France a brochure came round saying, “Why not join the Indian Army?” It showed animals and tigers and all sorts of things and seemed awfully pleasant. I thought, well anything rather than this, and I put my name down and then forgot all about it. Then, all of a sudden, one day in March, the adjutant called out, “Wilton, you’re due in Suez tomorrow. Get cracking, you’re joining the Indian Army.” In those days we were running a kind of night express to Port Said and on to Suez and so I went and joined the boat from there.


"In France, on our right, was the Loos offensive. We had the Portuguese on our right and they suddenly disappeared. All I can remember of that is one mad rattle which never seemed to stop; machine guns and heavy artillery fire. It went on, as far as I can remember, for about three days. This is only hearsay but I’m told the Portuguese disappeared; they retreated. You can find that out from the archives, it’s well known. [This cannot have been the Battle of Loos as this took place in September 1915 and Christopher Wilton did not arrive overseas until April 1917.]


"I don’t think I was ever in a line that went right over the top and into the German line. I think at that time the sector was fairly quiet. We used to watch our planes go over quite a lot. In those days they were small bi-planes with an open cockpit.


"There was no boredom in the trenches. Nobody could be bored, there was too much going on all the time. It was very much a war of attrition. You had to go round inspecting and talking to the fellows. You see, we were always on the qui vivre. After all, you only had to show your head just a bit over the trenches and you’d probably get shot straight away.


"Our trenches were quite good compared to some I’ve seen. Obviously if you were there you were continually keeping the trenches in good form, especially your places of look-out. The people who suffered the most were the married men who had wives and children, but for young fellas like me it was an experience. Quite frankly the war made a man of me. I think it did a lot of good to us to tell you the honest truth because we suddenly realised we were all the same. If that shell had your name on it, you’d had it, and that shell could also Tom, Dick and Harry next door.


"We were on parade in India on Armistice Day and General Rawlinson was inspecting us. Being adjutant I had a horse and I was in front. He came to me and said, “Well, Wilton, how did you get into the Indian Army?” I replied, “through the back door sir.” You see, unless you’d been to Sandhurst you weren’t considered fit for the Indian Army and that’s when things changed in the India Army. New gentlemen came out."

Christopher Wilton remained in the Indian Army at least until 1923 and possibly a good deal later. He married Marion Cooper in Bengal on the 8th April 1922. Christopher Wilton died in September 1984, just five months after I had recorded his First World War testimony.


Need help with your own First World War research? I have been studying the First World War for the past 30-odd years and now offer a fast and cost effective research service.