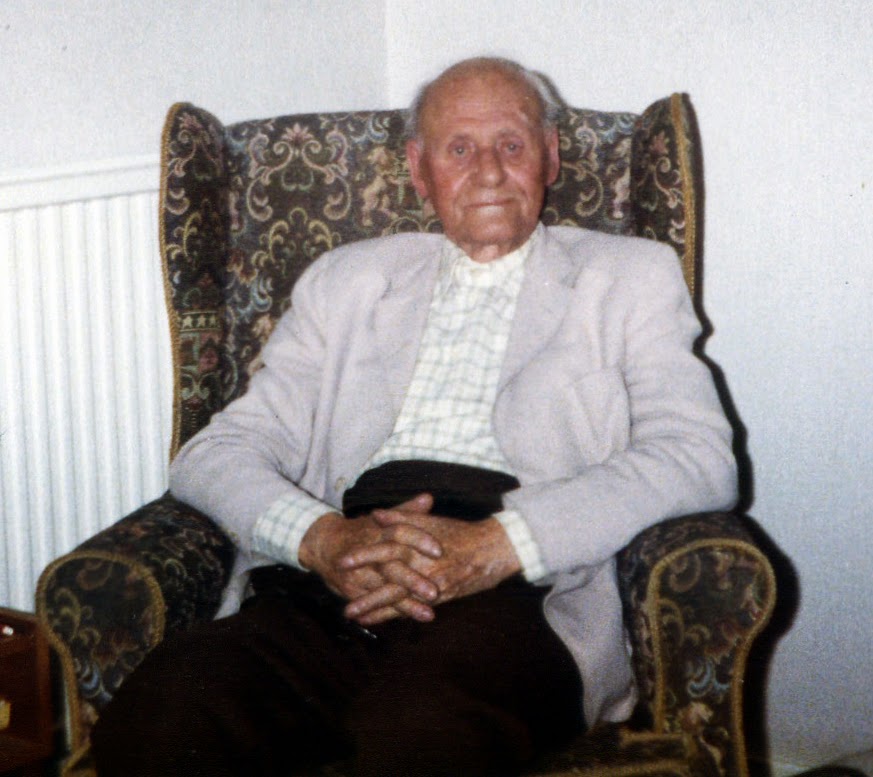 I met Arthur Slater on 5th October 1981 after he responded to an appeal for First World War veterans to come forward and tell their stories to a somewhat naïve nineteen-year-old.
Arthur was born in Beckenham, Kent on the 27th November 1895 and was studying at King's College, London when duty called and he enlisted in the army. On the 1911 census for England and Wales he appears as a fifteen-year old living at 201 Mackenzie Road, Beckenham with his parents and 20-year-old sister, Mary Elizabeth Slater, an elementary school teacher for Beckenham County Council.  I believe that Arthur was already a member of the Officer Training Corps at King's College and he was commissioned as a Second Lieutenant in the Devonshire Regiment, arriving in France in July 1916 where he joined the 7th Battalion.
"On 20th September 1916 we boarded one of the London buses which had been brought into war service and travelled up to Mametz which was the British front line. Our objective was to march into the fortified village of Ginchy, and the Staff thought it would be a walk-over. They said the wire would all be cut by the artillery fire but as it turned out, the wire was still uncut and there were machine guns firing down on us from Delville Wood as we were advancing.
"We'd assembled at Mouquet Farm just as it was getting dusk, and spread out in a long thin line ready for the attack. We didn't have time for rum so we passed it from hand to hand over the battleground. The ground wasn't too uneven and the advance would have been relatively easy had it not been for the machine guns. I got a bullet in my left leg straight away and fell down into a shell-hole. I'd got what they called, "a Blighty" and I was sent home."
While he was recuperating, impressed by the machine guns he had seen in France, Arthur applied for a transfer to the Machine Gun Corps and this was duly sanctioned. He now found himself serving with the 9th Division and left Folkestone for France on the 28th May 1917. It was at Passchendaele though, later that year, that his war ended.
"We were waiting for relief somewhere between St Julien and Zonnebeke and came under artillery fire. I was sheltering with about a dozen other people in a part of a German trench when a shell landed about twenty yards away. A piece of shell case came flying in and smashed me in the left knee-cap. I was the only one injured.
"They put me on a stretcher but I couldn't be taken down that night because the shelling was too bad. Instead, I spent the night in a pill-box which didn't do me much good. The next morning they tidied me up a bit at the Casualty Clearing Station near Ypres and removed the piece of shell case. They gave it to me later and I kept it in a bag for several years.
"I was put on a hospital train for Rouen and was unconscious for two days due to loss of blood and the morphine I'd been given. In fact after I'd recovered I had to undergo a course of treatment to cure me of my addiction to morphine.
"The terrible thing was that I had gangrene in my leg and because the arteries were absolutely rotted with it, it had to come off. A nurse had to press down hard on the pressure point in my groin to stop me from bleeding to death. In fact, matron thought I was going to die. They sealed up the arteries but didn't make a very good job of the stump which is why I've got a very uneven stump and practically no leg at all.
"By February 1918 I was recovered, but I didn't get my discharge until 1919 when I was given a job in the Civil Service as an air commissioner."
Arthur Slater died in 1982.

Need help with your own First World War research? Drop me a line. I offer a cost effective research service.