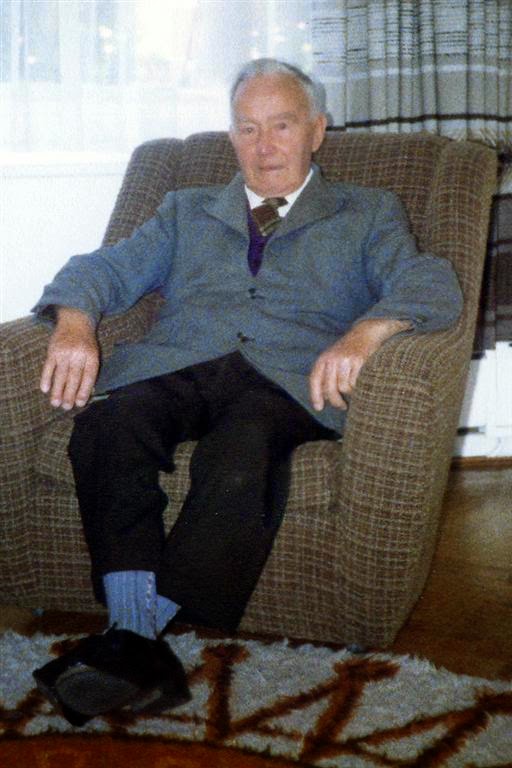 It was September 1981 and there was a knock at the door. My dad answered it and in stepped Henry Boldero. He'd seen an article in a local newspaper about my quest to interview First World War veterans and as he only lived around the corner he thought he'd pop round. The photo above was taken that same day, Mr Boldero sitting quite comfortably in my parents' arm chair.
He was born on the 24th February 1899 in Castleacre, Norfolk and was conscripted exactly eighteen years later on the 24th February 1917. He told me that he'd originally joined the Rifle Brigade but by the time he went to France in March 1918 he was serving with the Wiltshire Regiment. No service record survives for Henry Boldero, however his entry in the British War and Victory medal roll confirms that he served with the 1st Battalion, Wiltshire Regiment.
Mr Boldero was captured during a sudden advance by the Germans in April 1918, narrowly avoiding being bayonetted. He remembered the event as having taken place on the night of the 8/9th April but in fact, thanks to a surviving document held by the International Red Cross (below) we can see that he was actually captured at Messines on the 10th April.
He spent three days at Messines, unloading German equipment from barges and was then taken to Dulmen prison camp near Dortmund where he was put to work in the coal pits. At first, the food was poor, "dead horses with potatoes and barley. You couldn't eat the meat, it was like rubber" but after about six weeks, Red Cross food parcels began to arrive from Switzerland. He remained at Dulmen for the remainder of the war but was repatriated soon after the Armistice and was back in England in time for Christmas. 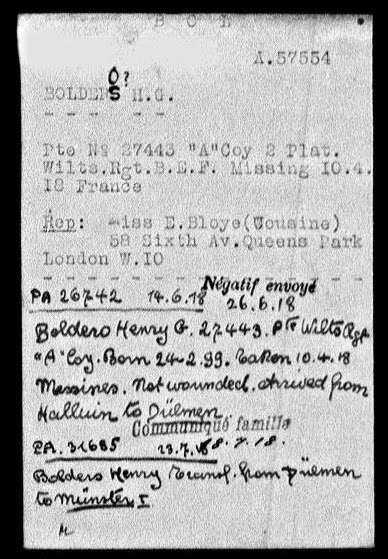