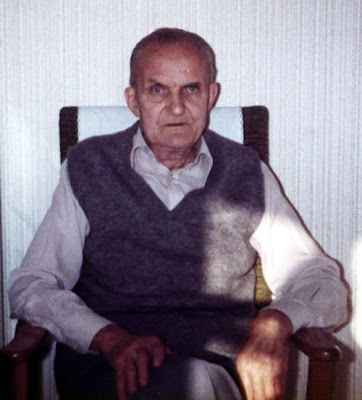 I interviewed James Townsend Simpson in Chelmsford on the 27th October 1981. He was born in Chelmsford on 1st June 1900 and was working as a milkman when he was called up in 1918. Mr Simpson recalled that he had joined up in December 1917, although one of his two medal index cards at the National Archives indicates that he joined on 4th January 1918 and was discharged on the 5th March 1919 due to wounds.

The 1901 census shows James living with his parents and two year old sister at 5 Myrtle Cottages, Manor Road, Braintree. His father, Henry T (possibly also Townsend) Simpson, was American by birth but a naturalised British citizen by the time the census was taken. He is recorded as being a 27 year old assistant superintendent for a Life Insurance Company.

James Simpson sailed to France with The Buffs (East Kent Regiment, number 26673) and later transferred to the 6th Middlesex Regiment, where he was given the number G/62175. My interview with him was brief and I never met him again. He died in March 1996 aged 95.

I joined up at five o'clock in the afternoon at Great Scotland Yard. We trained at Maidstone for three weeks and then at Crowborough in Sussex for four weeks.

We went to France in February or March 1918 and we arrived at Boulogne it was pitch black. We marched up to Ypres and through the whole bloody lot in the dark. When we got there they gave us a machine-gun and shoved us in a trench half full of bloody water. You were up to your knees in water and mud.

They started shelling when we got there and kept it up the whole of the blasted time. They slaughtered thousands of them that way, simply by leaving them in the trench when there was a bombardment on. There were a lot of idiots in that war. You held on to a bit of swamp which was no good to anyone because you couldn’t use it. There wasn’t anyone with any bloody sense at that time. We were in a hollow when we could have been on the ridge behind. A couple of our men got shot by a sniper there when they went to the latrines.

I was on one of three machine-gun posts in front of the front-line trench and we’d been there about five days when Jerry dropped a shell on us. He had a spotter plane come over in the morning and he wiped the lot out. He dropped one on the middle one and then one on either side. I saw my number one sitting at the gun with half of his head blown away.

I stayed there the day and night, waiting for the barrage to lift before they could come and fetch me out. I had shrapnel injuries to the knees, chest and shoulder.

I was transferred to the 41st General Hospital at Bruges and was there for eight or nine months. One doctor wanted to take my legs off and one wanted to experiment, so I let him experiment. He told me straight that he might play about with my legs for a year and then still have them off, but it all turned out alright.

After Bruges I came home to Stepping Hill Military Hospital in Stockport and then had two months’ convalescence in Ponting.